Eating Your Way Through the Philippines: Famous Filipino Dishes

The Filipino consumes three substantial meals a day on average. In addition to those meals, they also enjoy snacks in between.

Food is one of the things Filipinos love dearly - as you can imagine.

Philippine cuisine features a wide range of unique dishes. Thanks to the Filipinos’ love of food and aversion to food waste, they developed exquisite dishes that are still part of their culture.

It’s possible that you’ve eaten something which may have been Filipino in origin. Some are sweet, some are savory, and others are downright weird, as you have probably noticed. It does not taste like much at first, but it grows on you as you get used to it.

Unlike other cuisines, it isn’t as flamboyant or classy-looking. Although it’s not the best, it’s still very popular among both casual diners and gourmets. One unique characteristic of Philippine gastronomy is the homey, warm, and colorful taste that reflects Philippine culture.

There are many things to discover here in the world, especially when it comes to good food. The sheer number of options available can make it difficult to decide where to start. Is there any better place to be than on a seven thousand island archipelago?

You surely won’t regret eating in the Philippines.

Discovering the Classics is the best way to familiarize yourself with Filipino Food if you’re thinking about trying it out for yourself. Here are a few that you should try when visiting the Philippines. 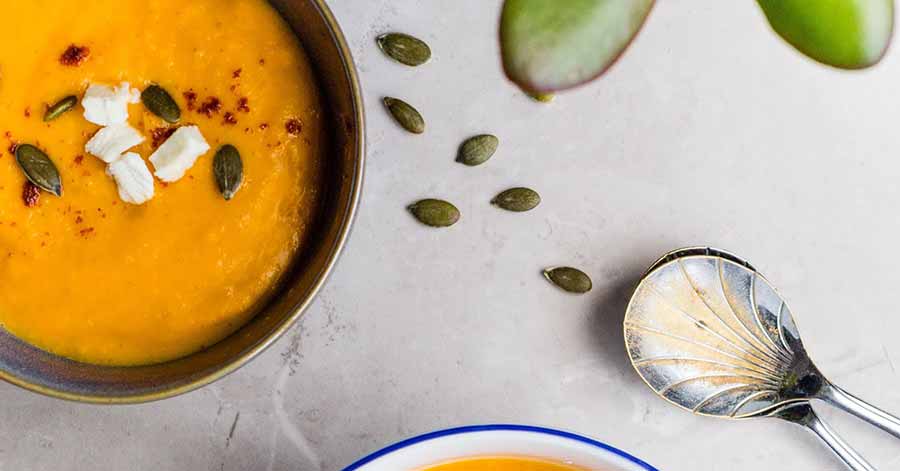 Among the many Filipino dishes, Kare-kare is said to have the most varied origins.

The perfect complement to this dish is bagoong (shrimp paste), as it creates an incomparable mélange of savory flavors.

It is unknown when or how Kare-kare as a Filipino cuisine originated. According to other sources, the name kare-kare is heavily influenced by Indian curry, while those from Pampanga (in the Philippines) claim to have created the recipe themselves.

It doesn’t matter where Kare-Kare originated, Filipinos still enjoy it, especially because preparing it is difficult and meticulous. When it is prepared in a Filipino home, you can bet that the entire family will be gathered around to enjoy it.

Filipinos are known for their love of stews and soups. A dish like Bulalo, or beef shank stew, certainly doesn’t slack off when it comes to meeting their standards.

Beef shanks and bone marrow are simmered slowly with fish sauce, onions, and peppercorns in water, then the vegetables are added, resulting in a flavorful soup. Considering the amount of love and care it takes to prepare this dish, it’s no wonder why it’s one of the most popular soups in the Philippines.

Have you ever been in a bad mood? Do you want something to warm you up during a rainy, cold night? Filipinos believe the best way to deal with this is to have a nice, steaming cup of Bulalo.

When you’re in need of comfort food, this dish is sure to please you.

There are several ways to prepare this dish. It is also possible to use goat meat, pork, or chicken in place of beef in this mouthwatering dish. 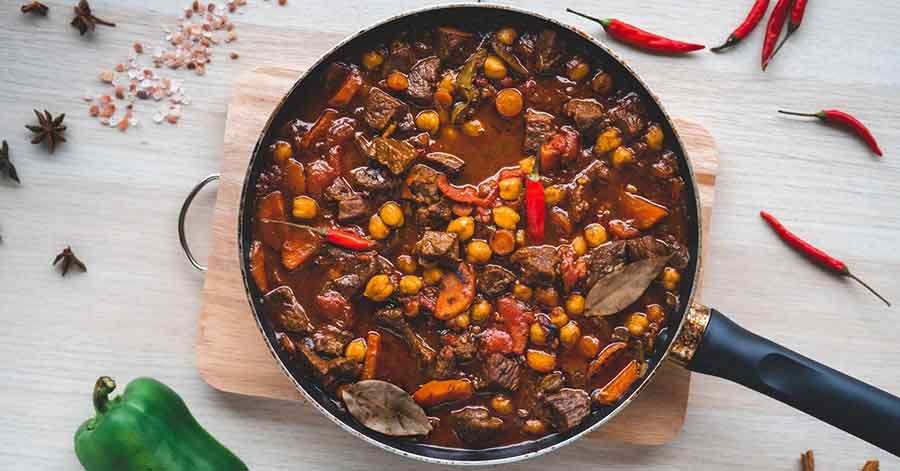 Any karenderia, or local eatery, is bound to have Kaldereta as a food choice.

A common ingredient in Kaldereta recipes is liver paste. It thickens the sauce by adding substance to it. There are a few places in the Philippines, however, that use peanut butter or coconut milk instead.

Surely, this dish should not be missed when exploring Philippine cuisine. Filipino households have long considered it to be one of the few staple dishes.

Another Filipino classic is Sinigang, a soup broth that is sour but utterly delightful.

There are two main variations of this dish: beef and pork. The Philippines abroad enjoy this dish because it is easy to prepare and is a comfort food favorite.

There’s a Filipino joke that says to keep the title of Filipino you must love Sinigang, but obviously that is a joke. That proves just how widespread the popularity of this dish is, regardless of whether it’s Filipino.

The flavors of this tangy dish are usually attributed to tamarind, kamias, and various vegetables. Filipino cuisine uses interchangeable meats, just like their other dishes. No matter what you choose, you’ll find yourself shivering in the delicious sourness of Sinigang.

Every native of the Southeast Asian country thinks of adobo when they think of comfort food. It is considered the unofficial national dish of the Philippines. This is one of the dishes that are often found at Filipino parties.

This dish is actually known as Adobo because of the method of preparing it, which involves marinating the meat in garlic, vinegar, and soy sauce. Adding a bay leaf, star anise, and whole black pepper makes this aromatic dish even more savory. 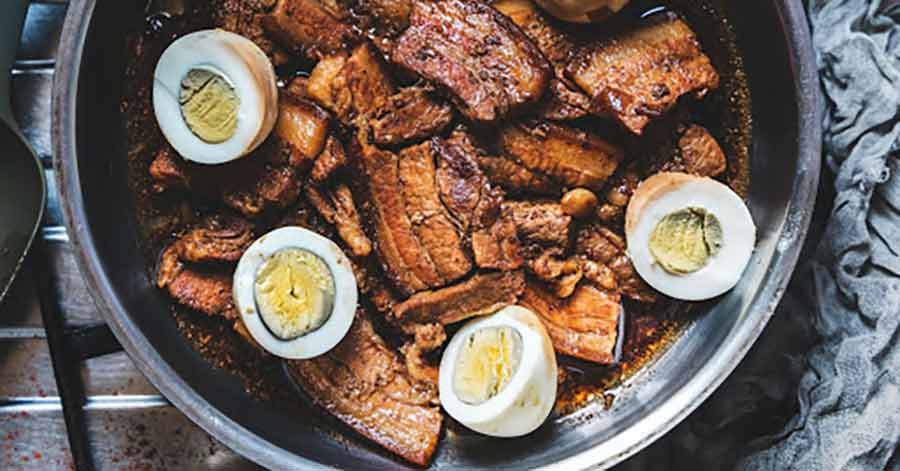 Adobo is most enjoyed by Filipinos living overseas, as it brings back memories to when they lived in the Philippines.

Perhaps you’re thinking, isn’t Adobo a Mexican seasoning? There is a strange coincidence between their names, even though they are used differently by the two ends of the spectrum.

Mexican Adobo = a type of seasoning used for marinades

Filipino Adobo = the cooking technique itself

This dish is what Filipinos are most looking forward to eating among all other dishes on the table. This is the best Filipino food for parties.

Whenever Filipinos have a gathering, Lechon is a must-have. The aroma of a completely roasted pig with superbly crisp skin is impossible to resist once you have tried it. You’ll feel even more so after you bite into something!

Although this dish is well-liked by many people, it is typically served only at special occasions. Typically, Filipinos spend several hours roasting the Lechon, which makes it even more special to them.

To avoid wasting any leftover food, Filipinos usually bring leftovers over to their home before leaving a party. Lechon leftovers are often made into Paksiw or Sisig so as not to waste any bit of food.

Nothing goes to waste when it comes to Filipino food. Originally from Pampanga, sisig was invented by Aling Lucing who took the remaining meat from the pig’s head, boiled, grilled and turned it into one of the Philippines’ favorite comfort food.

It’s considered a main dish or an appetizer and it can either be paired with a cup of rice or any alcoholic beverage. There are several sisig versions available across many places in the Philippines.

For example, chicken sisig is a popular version for people who don’t eat pork. There is also a seafood variation that replaces pork meat with squid, tuna, or bangus. For vegetarians, there is also a vegan sisig version where meat is replaced with tofu or vegetables.

Another Filipino comfort food is the simple Arroz Caldo. This Filipino recipe is a thick chicken rice porridge that closely resembles risotto. The dish originally came from China however, the hearty dish has fully integrated itself into Filipino culture.

It makes for a great morning or afternoon snack, on rainy days or when you’re down with the flu. Arroz Caldo is garnished with ginger, green onions, hard-boiled egg, and toasted bits of crushed garlic.

This light snack is commonly sold on street stalls and sometimes in the mall.

Considered the ultimate pork dish, Crispy Pata is deep-fried pig trotters or knuckles served with soy sauce and vinegar. What makes this dish so popular is its crunchy skin combined with tender and moist meat on the inside.

Although there are different variations on how to cook crispy pata, most recipes recommend boiling the pork meat first before frying it to achieve its famous crispy skin. The cooking process takes a while so it makes sense for this dish to be reserved for special occasions or for special holidays.

Crispy pata can either be paired with rice or as a booze appetizer.

Filipino-style pork barbeque is another popular Filipino dish. The meat is marinated with various sauces and spices before being skewered on bamboo sticks and then grilled over hot charcoal.

This dish is a staple of any Filipino restaurant or catering event. It’s also served at many gatherings and birthdays along with Lumpia Shanghai, sweet-style spaghetti, and hotdogs.

But the secret to what really makes all these dishes delicious is... 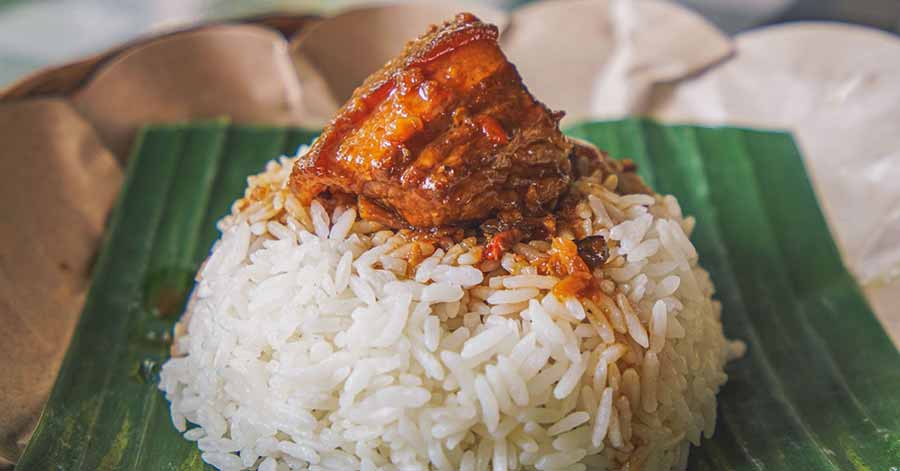 Filipinos take the infamous quote “rice is life” to the next level. There’s never a meal without this staple.

Whenever these dishes are served with the ultimate Filipino staple, they taste better than ever.

The Filipino people are avid consumers of rice, similar to their Asian neighbors. It’s cemented itself in Filipino eating culture. Adding this scratch-filled carbohydrate to Filipino cuisine completes its saucy nature.

A Filipino household never goes without rice for breakfast, lunch, or dinner. The Philippines are famous for their rice, so don’t be surprised if you see rice on the menu. It’s masarap, as the Filipinos say!

Newest, beautiful, single women now added for week of Wednesday, 23 November, 2022 - Tuesday, 29 November, 2022
You have to meet the women to marry them! What other international dating site offers you numerous opportunities to do that?